Serum ammonia levels are frequently ordered to diagnosis hepatic encephalopathy (HE) in patients with cirrhosis. Prior studies demonstrate that while ammonia levels correlate poorly with the degree of encephalopathy in patients with cirrhosis, these levels are neither sensitive nor specific for the diagnosis of HE. The current American Association for the Study of Liver Diseases (AASLD) guidelines argue that HE should be diagnosed based primarily on clinical criteria and increased ammonia alone does not add any diagnostic, staging, or prognostic value. Over utilization of ammonia may lead to inappropriate diagnosis of HE in patients without clinical symptoms, overtreatment with lactulose, and unnecessary cost to health systems.

1. To determine ordering practices of serum ammonia at a tertiary referral hospital in patients with a known diagnosis of cirrhosis.

2. To evaluate provider interpretation and subsequent management in the Emergency Department setting.

A retrospective observational cohort study was performed using a query all adult patients in which a venous serum ammonia level was drawn at Parkland Memorial Hospital between January 1, 2012 and November 4, 2018. Patients with cirrhosis were identified using ICD-10 codes documented in the electronic medical record. Detailed chart review was performed on 100 randomly selected patient encounters where initial ammonia level was elevated (≥50 µg/dL) in the Emergency Department (ED). Factors including history of HE, home use of lactulose, clinical evidence of encephalopathy, and hospital use of lactulose were used to determine provider interpretation and management of elevated ammonia levels.

During the study period, ammonia levels were drawn a total of 28,827 times. We identified 12,817 (44%) ammonia levels that were drawn on 2,632 patients with previously diagnosed cirrhosis. These levels were drawn over 7,496 hospital encounters and were ordered a mean 1.71 times per encounter (range 1-34). Baseline characteristics revealed encounters with 5,185 (69%) males, median age 58 years (IQR 48-60), median total bilirubin 2.0, and median INR 1.4. Composite scores including APRI (median 1.5, IQR 0.8-2.8) and FIB-4 (median 6.6, IQR 4.0-10.9) reflected a high degree of hepatic fibrosis. Initial ammonia levels were most often ordered in the ED (82%) and were elevated in 4,985 (67%) of encounters. Manual chart review revealed no change in clinical management in 90% of cases. In 10 (10%) encounters, lactulose was administered to patients without clinical evidence of encephalopathy. Using a Medicare reimbursement cost of $19.20 per study, the serum ammonia test cost the hospital $246,000 in unnecessary costs during the study period.

Hepatic encephalopathy remains a clinical diagnosis of exclusion after other causes of encephalopathy have been ruled out. Disease can be graded using the West Haven Criteria and other validated tools. We found serum ammonia levels continue to be frequently ordered in patients with known cirrhosis. In large majority of cases, elevated ammonia levels had no impact on clinical decision making. On the contrary, harm was observed through unnecessary cost, inappropriate diagnosis of HE, and overuse of lactulose in a substantial population of patients.

We propose optimizing the utility of serum ammonia levels by educating providers and limiting inappropriate use with best practice advisories and hard stops incorporated into the computerized physician order entry (CPOE). 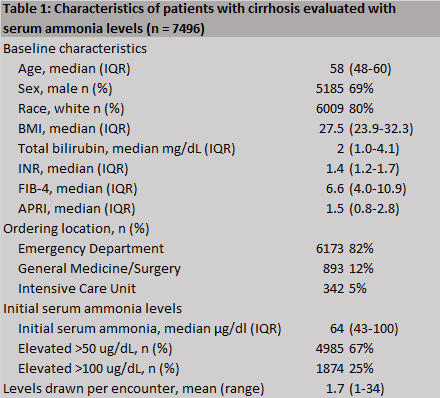 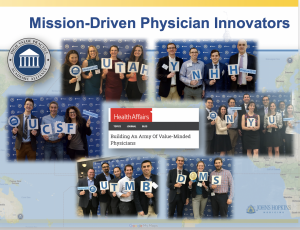