It is estimated that rate of adherence to chronic disease medications is only 50%. Higher adherence rates are thought to decrease mortality risks, re-hospitalization and healthcare costs. One of the many complex factors contributing to non-adherence is assuring timely access to medications. Interdisciplinary collaboration between physicians and pharmacists can play an important role in increasing access to chronic disease medications for high-risk patients by assuring these medications have been refilled upon hospital discharge. Proper communication between the pharmacist and physician is key in assuring refill requests are filled.

The objective of this quality improvement project was to increase the rate at which chronic disease medications were refilled upon discharge by implementing interventions prompting physicians to accept pharmacist refill recommendations made during admission medication reconciliation.

Admission medication histories (AMHs) were completed based on physician request or using the PARADE (Patients at Risk for ADEs) risk score (analytical-model utilized by our pharmacy team to identify high risk patients). Medications requiring refill (0 refills remaining) were identified by the pharmacists completing AMHs. Three distinct interventions were implemented in successive order: 1) Pharmacists write a progress note in the electronic medical record indicating which medications need to be refilled, 2) Pharmacists leave a highlighted alert message under the medication in the discharge navigator, 3) Pharmacists prepare and pend refill orders in the discharge navigator. Refill rates were collected after each intervention. Refill rates were calculated by dividing the number of refill recommendations by the number of refills accepted and ordered by the physician at discharge.

Pharmacist-led admission & discharge medication reconciliation can help identify which chronic medications require refill upon hospital discharge. Implementing interventions that make the process of identifying and refilling these medications easier for physicians increases the rate at which these medications are refilled at discharge.

Increasing the refill rate of chronic disease medications upon hospital discharge is a small, simple intervention that can aid in curbing medication non-adherence. This project identifies several interdisciplinary collaborative interventions that can be implemented by pharmacy teams to increase the rate at which chronic disease medications are refilled upon discharge. Although it is difficult to determine whether this specific intervention would singularly impact healthcare utilization or outcomes, it removes one of the many barriers that contribute to medication non-adherence. 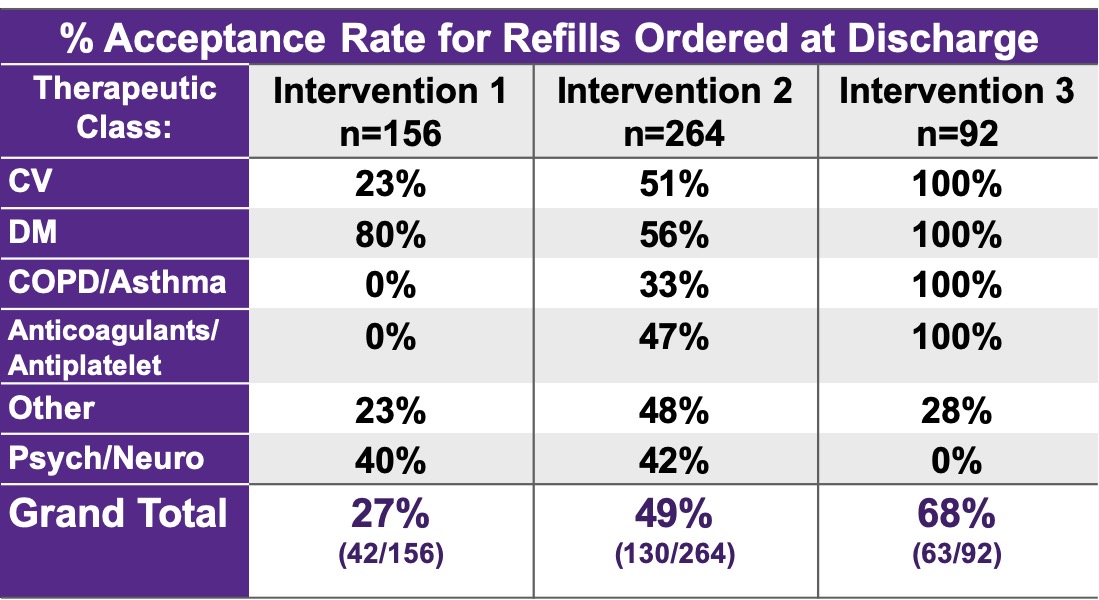